The Architect Registration Examination, commonly known as the ARE, is a challenging and comprehensive assessment for prospective architects. The exam has seven divisions: programming, planning, and practice; site planning and design; building design and construction systems; schematic design; structural systems; building systems; and construction documents and services. 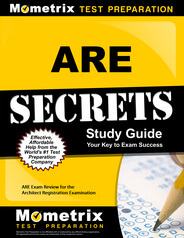 Prepare with our ARE Study Guide and Practice Questions. Print or eBook. Guaranteed to raise your score. Get started today!

The structural systems division consists of 125 multiple-choice questions and one graphic vignette. It covers the following topics: general structures, seismic forces, wind forces, and general lateral forces. The vignette for this section has to do with structural layout.

The building systems division of the ARE consists of 95 multiple-choice questions and one graphic vignette. The topics covered in this division are codes and regulations, environmental issues, plumbing, HVAC, electrical, lighting, and specialties. The vignette is the development of a mechanical and electrical plan. 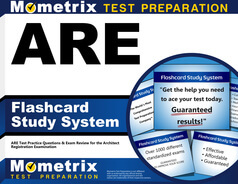 ARE Flashcards. Proven ARE test flashcards raise your score on the ARE test. Guaranteed.

The construction documents and services division of the ARE consists of 100 multiple-choice questions and one graphic vignette. The topics covered in this division include codes and regulations, environmental issues, construction drawings and project manuals, and project and practice management. The vignette in this section relates to a building section.

The ARE was developed by the National Council of Architectural Registration Boards.

Explore our free ARE review provided by Mometrix. Check out our premium ARE study guide to take your studying to the next level. If you benefit from these materials, just click the link below! To compliment our ARE book, we also offer extensive flashcards for even more ARE exam prep help. We hope you enjoy our products! Your purchase helps us make more great, free ARE certification content for test-takers just like yourself.

1. A foundation is being built in clay soil. If the area of a correctly designed footing has an area of 12 square feet and the applied load is 24,000 pounds, then what is the bearing capacity of this soil?

2. What advantage is gained by adding calcium chloride to concrete as an admixture?

3. A slump test is performed on concrete used in a building slab. The concrete slumps one inch during the test. What conclusions can be drawn about the concrete that this sample is from?

4. Where should the vapor barrier be placed in the wall construction in a cooling climate such as Phoenix, Arizona?

5. Which of the following is a disadvantage of pursuing a design/bid/build method of project delivery?

7. Which of the following materials has the highest shading coefficient (SC)?

8. Which of the following is NOT a characteristic of a ramp that is handicapped accessible?

9. Which of the following is NOT a principle that Clarence Perry championed in his “Neighborhood Theory” in 1929?

11. What is the definition of an arterial road?

12. Which of the following is NOT usually true when describing the cross section of a street?

1. B The soil-bearing capacity is equal to the load divided by the area of the footing, so 24,000 pounds divided by 12 square feet equals 2000 pounds per square foot. The soil-bearing capacity is the pressure that a given soil can hold without settling enough to negatively impact a structure. Clay soil has one of the lowest bearing capacities along with sand and silt, while rock and gravel can support the highest pressures. Answers C and D are in kips per square foot, where a kip is equal to 1000 pounds of force.

2. A Adding calcium chloride as an admixture accelerates the hydration rate, which produces more heat of hydration. This aids the concrete in curing in cold weather. An example of admixture that would allow a lower water-cement ratio is an air-entraining admixture. Option C is incorrect because a calcium chloride admixture would increase the chances of reinforcing steel corrosion in the future. Option D is incorrect because calcium chloride will accelerate the curing process and get the concrete to its ultimate compressive strength faster, but it will not change that strength.

3. A A slump test is conducted by filling a cone that is 12 inches tall with an upper diameter of eight inches and a bottom diameter of four feet with fresh concrete. The cone is then turned upside down and removed, and the concrete is allowed to settle in a pyramid-like form. Then the new height of the slump is compared to the height of the cone. Generally, the concrete should slump two to six inches. If it slumps less than that, the concrete may be too rigid to do its job properly. If it slumps more than that, it might be too soft. Once the test is complete, the concrete mixture can be modified if necessary.

4. A The vapor barrier should be placed on the exterior side of the thermal envelope in this climate because the vapor barrier should always be placed on the warm side of the thermal envelope. The reason for this is that warm air can hold more moisture than cold air. When warm air hits a cold surface, it cannot hold as much moisture, so some of the moisture condenses on that surface. For example, if warm air penetrates a wall and hits a cooler section of drywall on the interior of the building, moisture will condense on the drywall, which can lead to mold formation. In addition, if the insulation in the wall gets wet, it loses much of its insulating value. In a heating climate such as New England, the vapor barrier would be on the interior, because that is usually the warm side. If a vapor barrier is installed on both the interior and exterior sides, moisture that is trapped in the wall (which is inevitable), will have a difficult time escaping and will make moisture problems worse.

5. A This method has contractors bid on the project after design has been completed. Though cost estimates will be finalized during development, a firm price is not established until a point where it is challenging to change the scope or quality of the project. Choice B is actually an advantage of design/bid/build. Choice C is incorrect because the contractor will rarely be acting in the best interest of the owner. Even in the case of design/build, the contractor and architect are working together and not necessarily doing what is best for the owner. In the case of design/bid/build, the architect is working in the best interests of the owner in design and construction. Option D is incorrect because the design is completed before construction starts.

6. A Although option B is a true statement, it does not have anything to do with why additive alternates are preferable. Options C and D are incorrect because it does not take any less time to use additive alternates, nor is it any easier to price them. Prices must still be obtained for all components and associated labor. Option A is the correct answer because contractors tend to give less of a credit for work taken out of the project than the actual value of the work performed.

8. C In actuality, the maximum rise allowed is 30 inches. The maximum slope allowed is 1:12, so a ramp that is 30 feet long can have a rise of 30 inches. Other ramp requirements are that a ramp has handrails if it is more than six feet long or if it has a rise of more than six inches. Even at these small rises, it is important to have a handrail so that people recognize that there is a change in surface planes and will not accidentally step over the edge while not prepared for the change.

10. B “FAR” stands for floor area ratio. This is the ratio of floor area of the building on the site to the area of the site itself. The building in the example has an area of 80,000 square feet, and the site has an area of 100,000 square feet, so 80,000 divided by 100,000 equals 0.8. Maximum or minimum FARs may be established in certain areas as a way of controlling a building’s form. If a building is in a residential neighborhood, it may have a low FAR in order to limit the size and mass of the building. This would be most useful in conjunction with a height limitation as well, as a building with a small footprint could be many stories tall and stay under the maximum FAR. Similarly, a minimum FAR could be required in an urban context in order to ensure that the building mimics its surroundings in scale.

11. D The hierarchy of streets is: residential road, collector road, arterial road, freeway. A collector road runs along the edge of a residential neighborhood and has many residential (low traffic) streets that connect to it. These collectors “collect” cars from neighborhoods and direct them to arterials, which are high capacity roads that usually have limited access except at major intersections. Arterials, in turn, connect to freeways via on/off ramps located on the highways. This system ensures that the roads are properly sized for the number of cars travelling on them and that cars move up and down the line from smallest to largest and back, which helps traffic flow smoothly.

12. D Choices A through C are all true when describing a street. However, roads are typically sloped up to a half-inch per foot in order to provide positive drainage. This is enough to ensure that the road does not collect water on its surface, which could present a significant chance for cars to hydroplane. This is not too far off from the quarter-inch per foot that roofs are usually sloped in order to provide positive drainage. One inch per foot of slope is somewhat excessive, as it would mean that the edges of a road would be one foot below its center, if a road is 24 feet wide.