The Multistate Bar Exam (MBE) is an exam that has been developed by the National Conference of Bar Examiners (NCBE). This exam is used by a number of jurisdictions as part of their own testing of candidates to determine if they are competent to practice law in that jurisdiction. A listing of the jurisdictions that uses that MBE can be found on the NCBE website. 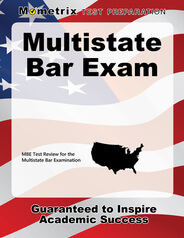 These deadlines can be found on the NCBE website, as well as by calling the state bar admission agency for the jurisdiction in which one is seeking admission. Fees for the MBE also vary by jurisdiction, and this information can be found online as well.

The MBE is a six hour, paper and pencil examination. The exam is divided into two testing periods (morning and afternoon), each lasting three hours. 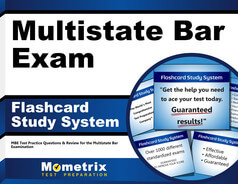 There are 33 questions that deal with contracts on the MBE. Of these questions, 60% deal with the formation of contracts, conditions, and remedies. Forty percent deal with consideration, third-party beneficiary contracts, assignment of rights and delegation of duties, statutes of frauds, parol evidence and interpretation, impossibility of performance and frustration of purpose, and discharge of contractual duties.

There are 31 questions on the MBE that deal with the area of constitutional law. Of these questions, 50% deal with individual rights, and 50% deal with the nature of judicial review, the separation of powers, and the relations of nation and states in a federal system.

Thirty-one questions on the MBE deal with the area of criminal law and procedure. Of these questions, 40% deal with the constitutional protection of accused persons, and 60% deal with homicide, other crimes, inchoate crimes and parties, and general principles.

On the MBE, credit is given for correct responses to the presented questions. A raw score is first calculated, and the raw score is equal to the number of questions answered correctly. A scaled score is then calculated using a process called equating. This takes into account the differences in difficulty on different forms of the examination. The minimum passing scaled score for the MBE varies by the jurisdiction in which the exam is taken. The minimum passing scaled scores for each participating jurisdiction can be found on the NCBE website. In addition, the average amount of time that it takes to grade the MBE and report the scores to candidates also varies by jurisdiction. This information can be found online the NCBE website as well.

Prior to taking the MBE, it is imperative that candidates are familiar with the structure and content breakdown of the exam. This will aid in helping candidates know which areas should be studied and reviewed prior to taking the exam. In addition, doing sample questions and taking sample tests can also aid in preparation. During the exam, it is important to work steadily and as quickly as possible. All questions on the MBE should be answered, since blank questions count as incorrect responses. If a question seems difficult, it can be marked and revisited later during the exam. If an answer to a question is not known, it is best to make a best guess, and then move on to the next question. In addition, all answers must be marked clearly on the answer sheet. Any answers that are unclear may not be read properly by the grading equipment, so being clear is highly important.