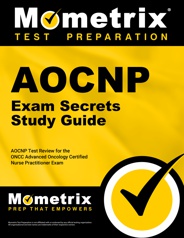 Prepare with our AOCNP Study Guide and Practice Questions. Print or eBook. Guaranteed to raise your score. Get started today!

1. Which of the following urinary diversions after radical cystectomy for bladder cancer is most likely to lead to urinary tract infections and/or renal calculi?

2. A patient with cancer is undergoing chemotherapy and develops a fever of 103.50F; he is found to have a neutrophil count of 300/mm3. Physical exam is not helpful in pinpointing the source of infection. Cultures are pending. Appropriate initial empiric antibiotic therapy might include the following EXCEPT:

3. A 65-year-old man undergoing chemotherapy for lung cancer suddenly complains of bilateral leg weakness and some back pain. An MRI scan shows metastatic disease of the lumbar spine with vertebral collapse. Which of the following would be the most likely treatment sequence?

4. Which of the following second malignancies is most likely in a male patient with Hodgkin lymphoma treated with MOPP chemotherapy (mechlorethamine, Oncovin, procarbazine, prednisone)?

5. During the conditioning phase prior to bone marrow transplant, many patients are treated with high-dose chemotherapy, including cyclophosphamide. The latter may cause a persistent hemorrhagic cystitis. Which of the following is useful as a preventive or ameliorating agent? 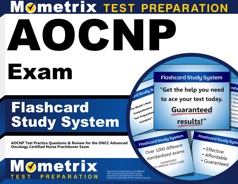 1. B: Urinary diversions are performed when the cancerous bladder is removed by radical cystectomy. The surgery usually includes prostatectomy and removal of the pelvic lymph nodes in men and removal of the ovaries, tubes, and uterus in women. Urinary diversion may be employed by an ileal conduit in which the ureters are implanted into a segment of small bowel with the distal end brought out to the abdominal wall via a stoma. This is a freely refluxing system and urinary infections and subsequent stone formation may occur with some frequency. Other diversions include a continent diversion in which a urine reservoir is created from bowel tissue and continence is maintained by construction of a one way flap valve; or an orthoptic neobladder in which an artificial bladder is constructed from stomach or intestinal tissue and attached to the urethra. These tend to preserve continence and decrease the likelihood of urinary infection and calculi.

2. C: Choosing the correct empiric antibiotic therapy for cancer patients with fever and neutropenia is a complex matter and to some extent depends on a high degree of suspicion as to the source and nature of the infection. It also requires some knowledge of the bacterial profile within a particular institution. For high-risk patients, an IV infusion of an antipseudomonal cephalosporin or penicillin (ex.ceftazidime or piperacillin-tazobactam) or a carbapenem may be used. Use of vancomycin is controversial unless there is a strong suspicion of methicillin-resistant Staphylococcus aureus (MRSA). This is because frequent or prolonged use of vancomycin has led to the development of resistant organisms, especially enterococcus. Fluoroquinolones such as ciprofloxacin or levofloxacin may be used but should not be used alone.

3. A: This patient has a spinal cord compression that must be addressed immediately. It is most common in tumors that invade the spine, leading to vertebral collapse and compression of the cord. It may also occur with invasion of the spinal canal or with primary tumors of the spinal cord. Most patients complain of back pain and there are usually neurologic findings consistent with the level of the cord that is compromised. Most likely treatment sequence is administration of corticosteroids to reduce inflammation and edema (and may be oncolytic for some tumors such as lymphomas) followed by radiation therapy to a dose of 3000 to 4000 cGy given over several weeks if the tumor is radiation sensitive. Otherwise, surgery is an option and may take precedence is there are profound neurologic changes present and a surgical decompression is possible. Chemotherapy is less effective, especially in a patient already receiving it, except in some childhood tumors.

4. A: Second malignancies are not uncommon in patients with Hodgkin lymphoma who have received combination chemotherapy containing alkylating agents or combined with radiation therapy. The most frequent solid malignant neoplasm (SMN) reported were those of the lung, gastrointestinal tract, and female breast. According to one study, the overall 25-year follow-up data of 1111 patients of all age groups showed an SMN rate of nearly 20%. There was a decrease in the risk after 25 years of survival. The overall leukemia risk at 15 years posttreatment, according to a second study, was 4.2% with two peaks: 3 and 8 years after treatment. Those who had extended-field radiation therapy or combination chemotherapy with alkylating agents had the highest risk. Those who received involved field radiation only had a lower risk. No leukemias were found in those who received combination chemotherapy with ABVD (adriamycin, bleomycin, vinblastine, and dacarbazine).

5. C: Hemorrhagic cystitis is common after high-dose cyclophosphamide or ifosfamide chemotherapy and may be persistent after the cessation of treatment. It is usually accompanied by pain in the bladder area and hematuria and sometimes dysuria. Preventive measures include high volume fluids with frequent voiding before and during chemotherapy or continuous bladder irrigation. A chemoprotective agent such as mesna may also be given intravenously or as a pill before or during the chemotherapy. The drug leaves a bad taste, so addition of strong-flavored liquids to the oral preparation is recommended. There are few other side effects. Antispasmodics and analgesics may also be given to the patient to diminish discomfort.