1. Which of the following statements is the definition of parallel lines?

2. The definition “a function that takes points in the plane as inputs and gives other points as outputs” refers to which of the following terms?

3. If trapezoid JKLM, shown below, was rotated 180° clockwise about the origin, determine which notation would represent the new coordinates of J’ K’ L’M’? 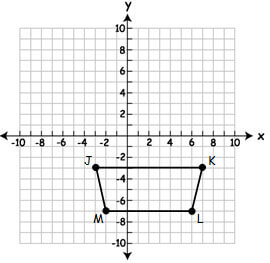 4. Which of the following figures show parallelogram WXYZ being carried onto its image W’X’Y’Z’ by a reflection across the x-axis? 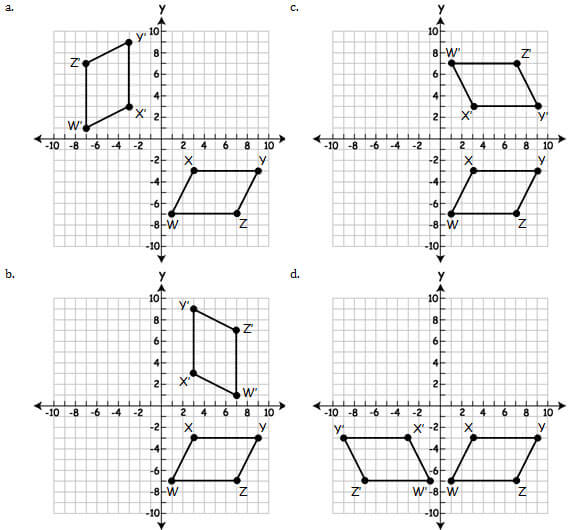 5. If ‾STis reflected across the line y = x, what is the new coordinate point of T’? 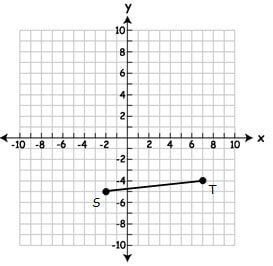 6. Which of the following figures has been rotated 90° clockwise about the origin? 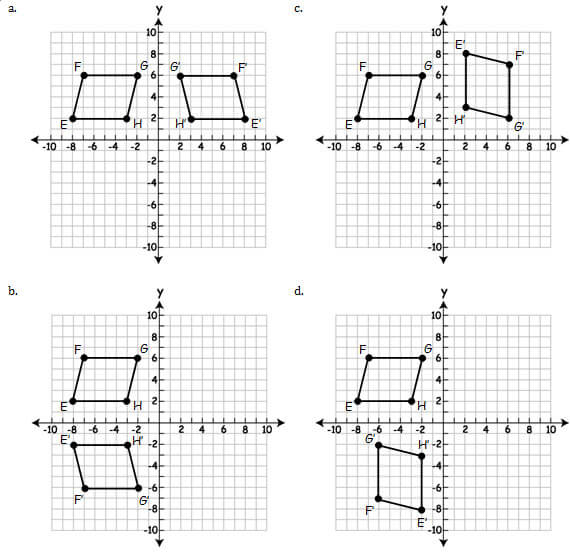 7. Which of the following rules describes the translation of JKLM to its image J’K’L’M’?

8. Which set of figures is congruent?

9. Which of the following is true about the relationship between the two triangles shown below?

10. ASA triangle congruence can be used to prove which of the following pairs of triangles congruent?

2. D: A transformation is described as a function that takes points in the plane as inputs and gives other points as outputs. In Answer A, coincident means that two images are superimposed on one another. In Answer B, invariant means a property that cannot be changed by a given transformation. In Answer C, mensuration is the measurement of geometric figures, such as length, area, angle measure and volume.

6. C: Since EFGHis initially located in Quadrant II, a 90° clockwise rotation will rotate the image into Quadrant I. As EFGH is rotated 90° clockwise, each vertex of the figure will undergo the coordinate transition of (x,y) →(y,-x), as is the case in Answer C. Answer A is a reflection across the y-axis. Answer B is a reflection across the x-axis. Answer D is a 90° counterclockwise rotation.

7. B: To determine the translation, compare the coordinates of J(-4,1) and J'(2,-7). To find the change in the x-direction, subtract the x coordinate of the starting position from the final position that is Δx=2-(-4)=2+4=6. Similarly, the change in the y-direction is -7-1=-8. We can check that the same is true for the other vertices. Therefore, the rule that describes the translation of JKLM to its image J’K’L’M’ is (x,y)→ (x+6,y-8). Answer A incorrectly used the opposite signs. Answer C incorrectly used the opposite signs and had the x and y directions reversed. Answer D had the x and y directions reversed.