Questions 1-2 are based on the following chart: 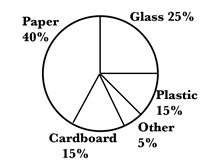 1. The Charleston Recycling Company collects 50,000 tons of recyclable material every month. The chart shows the kinds of materials that are collected by the company’s five trucks. What is the second most common material that is recycled?

2. Approximately how much paper is recycled every month?

3. Forty students in a class take a test that is graded on a scale of 1 to 10. The histogram in the figure shows the grade distribution, with the x-axis representing the grades and the y-axis representing the number of students obtaining each grade. If the mean, median, and modal values are represented by n, p, and q, respectively, which of the following is true? 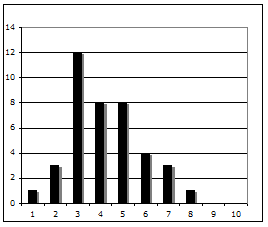 4. The graph below, not drawn to scale, shows a straight line passing through the origin. Point P1 has the (x,y) coordinates (-5,-3). What is the x-coordinate of point P2 if its y-coordinate is 3?

5. Examine the graph and determine which of the following is true. 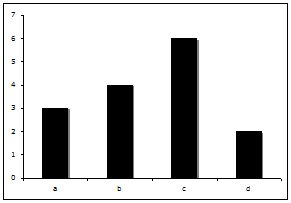 6. The chart below represents the average amount of rain falling each month in the town of Tegulpa. During which month of the year does the most rain fall? 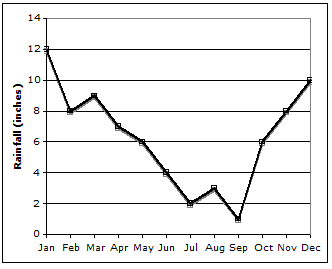 7. Refer to the chart shown with Question 6. Which month shows the greatest increase in rainfall compared to the preceding month?

8. A circle graph is used to show the percent of patient types that a hospital sees. How many degrees of the circle should the graph show to represent pediatric if 1/3 of the patients are pediatric patients?

The figure is a pie chart, a circular diagram that shows the relative amounts of each variable as a slice of the whole circle. The larger the amount of the variable, the larger the slice. In addition, the percentage of each variable, or recycled material, is shown next to each slice. In this chart, paper is the most common recycled material, or the largest variable, representing 40% of the total. The next largest is glass, at 25% of the total. All the other materials represent smaller portions of the total.

The mean, or average, of the distribution can be computed by multiplying each grade by the number of students obtaining it, summing, and then dividing by the total number of students. Here, n = 4.2. The median is the value p for which an equal number of students have received grades that are higher or lower than p. Here, p = 4. The mode is the most frequently obtained grade, and here, q = 3. Thus, n > p > q.

The graph is at its highest point for the first data point, which corresponds to 12 inches of rain during the month of January.

Rainfall in October increases to 6 inches from 1 inch in September. This represents an increase of 5 inches. None of the other month-to-month differences are as great.