The Armed Forces Qualifying Test, commonly known as the AFQT, is used by the United States military to assess prospective service members. The questions on this test are taken from the Armed Forces Vocational Aptitude Battery. 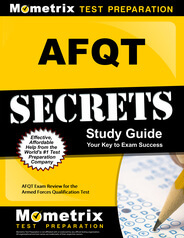 Prepare with our AFQT Study Guide and Practice Questions. Print or eBook. Guaranteed to raise your score. Get started today!

The formula for computing scores on the AFQT test is AR + MK + (2 x VE), with VE = PC + MK. Scores are then placed in the following categories:

These AFQT test score categories are percentiles, which indicate how well the test-taker performed relative to others. A person scoring a 50, for example, performed as well as or better than half of the other test-takers.

The percentile score is based on the raw score (number of questions answered correctly) and the difficulty of the test version. The minimum passing score for the AFQT varies between branches of the military.