There are a variety of standardized mechanical aptitude tests that require a test taker to recognize various mechanical principles suggested by a question test. Some of the concepts tested include sounds and heat conduction, velocity, gravity, and force, among others. The number of test questions that cover these concepts can vary from test to test. 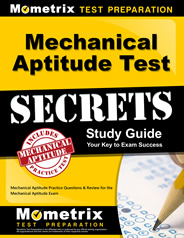 Prepare with our Mechanical Aptitude Study Guide and Practice Questions. Print or eBook. Guaranteed to raise your score. Get started today!

While mechanical aptitude tests have a variety of uses, they are most helpful for employees and employers in the professions and industries that involve manufacturing and production, energy and utilities, automotive and aircraft mechanics, general installation/maintenance/repairpersons, skilled tradespersons (including electricians, welders, and carpenters), and heavy equipment operators.

One of the more popular mechanical aptitude tests is the Bennett Mechanical Comprehension Test (BMCT). This test measures a candidate’s ability to perceive and understand how physical forces and mechanical elements relate to one another in various types of practical situations. The BMCT is used to predict how well a test taker may perform in different types of vocational and technical training settings. It is composed of 68 questions and test takers are allowed 30 minutes to complete it. The BMCT’s reading and exercise levels of concentration are no higher than a sixth-grade reading level. When research was conducted on the greatest predictor of job performance of nearly 200 manufacturing employees, scores on the BMCT were the single greatest predictor, even higher than supervisory ratings.

The Air Force Officer Qualifying Test (AFOQT) is another type of mechanical aptitude test, though it is somewhat similar to the SAT or ACT. It can be used for selection into specific training programs such as, but not limited to, those seeking to become a pilot or those seeking to enter combat systems officer training. It is a required test for all cadets and students on scholarship. The exam can only be taken twice, though it is not guaranteed that everyone seeking to retake the AFOQT will be allowed to. At least 180 days must pass between the initial take and the retake. The most recent AFOQT score is the one that counts, which means that for those who are allowed to retake the test, the first score will no longer count. The AFOQT takes five hours to take and contains 380 questions that are divided into 12 different subsets. The results of the AFOQT are given in the areas of pilot, combat systems officer, academic aptitude, verbal, and quantitative.