If you’ve been thinking of going to college, you may have run across references to something called the ASSET test, or simply ASSET. This is a test that you may have to take before starting school. Of course, if you’re like most people, you haven’t heard of ASSET. Almost everyone who considers going to college has heard of the ACT exam or the SAT test, but not this particular test. That’s because the number of schools that use this test is tiny compared to the number that use either the SAT or ACT. 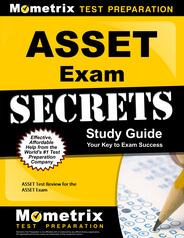 Prepare with our ASSET Study Guide and Practice Questions. Print or eBook. Guaranteed to raise your score. Get started today!

ASSET is actually administered by ACT, Inc., which is the company that administers the ACT test. (ACT doesn’t officially stand for anything; years ago the initials stood for American College Testing, but like Kentucky Fried Chicken officially changing its name to KFC, ACT became the legal name of the company a few years ago.)

Of course, not all two year colleges and technical schools require incoming students to take the ASSET, but many do. If you’re attending a school that uses this test, the school will use your score to help determine what level of academic challenge you’re prepared for in several areas. College administrators want to make sure that students get the education they’re paying for, which means it’s important that there’s not a mismatch between their skill levels and the work they’re being asked to do.

If a student is being given assignments he’s not ready for, he will likely fall behind in his studies and not graduate on time, and odds are high that he’ll simply drop out altogether. Then he’ll be stuck paying off college loans for an education he didn’t get. On the other hand, if a student is being given assignments that are too easy, which don’t challenge him at all, he will become bored.

He’ll realize his time is being wasted, and he will also be at high risk for dropping out, after deciding that college is a “joke” and a “ripoff” because he wasn’t learning anything new. That’s why it’s so important to place students in classes closely suited to their skills and knowledge levels, and the ASSET exam helps colleges do just that.

Each underlined word or phrase in the following passage either does or doesn’t contain an error or style, grammar, or usage. If you believe it’s correct as shown, select a for NO CHANGE; otherwise, select the answer that would be the best choice to replace the word or phrase.

Read the following passage and then answer the questions that follow

Daylight Saving Time (DST) is the practice of changing clocks so that afternoons have more daylight and mornings have less. Clocks are adjusted forward one hour in the spring and one hour backward in the fall. The main purpose of the change is to make better use of daylight.

DST began with the goal of conservation. Benjamin Franklin suggested it as a method of saving on candles. It was used during both World Wars to save energy for military needs. Although DST’s potential to save energy was a primary reason behind its implementation, research into its effects on energy conservation are contradictory and unclear.

Beneficiaries of DST include all activities that can benefit from more sunlight after working hours, such as shopping and sports. A 1984 issue of Fortune magazine estimated that a seven-week extension of DST would yield an additional $30 million for 7-Eleven stores. Public safety may be increased by the use of DST: some research suggests that traffic fatalities may be reduced when there is additional afternoon sunlight.

On the other hand, DST complicates timekeeping and some computer systems. Tools with built-in time-keeping functions such as medical devices can be affected negatively. Agricultural and evening entertainment interests have historically opposed DST.

DST can affect health, both positively and negatively. It provides more afternoon sunlight in which to get exercise. It also impacts sunlight exposure; this is good for getting vitamin D, but bad in that it can increase skin cancer risk. DST may also disrupt sleep.

Today, daylight saving time has been adopted by more than one billion people in about 70 countries. DST is generally not observed in countries near the equator because sunrise times do not vary much there. Asia and Africa do not generally observe it. Some countries, such as Brazil, observe it only in some regions.

DST can lead to peculiar situations. One of these occurred in November, 2007 when a woman in North Carolina gave birth to one twin at 1:32 a.m. and, 34 minutes later, to the second twin. Because of DST and the time change at 2:00 a.m., the second twin was officially born at 1:06, 26 minutes earlier than her brother.

7. According to the passage, what is the main purpose of DST?

8. Which of the following is not mentioned in the passage as a negative effect of DST?

9. The article states that DST involves:

10. Which interests have historically opposed DST, according to the passage?

11. According to the article, increased sunlight exposure:

1. A box of laundry detergent contains 16.5 oz of product. What is the maximum number of loads that can be washed if each load requires a minimum of oz of detergent?

6. To determine a student’s grade, a teacher throws out the lowest grade obtained on 5 tests, averages the remaining grades, and round up to the nearest integer. If Betty scored 72, 75, 88, 86, and 90 on her tests, what grade will she receive?

15. The sum of two negative numbers:

17. The number 5 is multiplied by its reciprocal. What is the result?

4. Which of the following equations satisfies the five sets of numbers shown in the table?

3. If x and y are positive integers, which of the following expressions is equivalent to (xy)7y – (xy)y ?

4. Which equation is represented by the graph shown below? 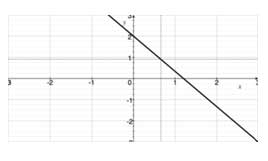 5. The graph below, not drawn to scale, shows a straight line passing through the origin. Point P1 has the (x,y) coordinates (-5,-3). What is the x-coordinate of point P2 if its y-coordinate is 3?

1. Which of the following expressions represents the ratio of the area of a circle to its circumference?

2. The sides of a triangle are equal to integral numbers of units. Two sides are 4 and 6 units long, respectively; what is the minimum value for the triangle’s perimeter?

3. The two shortest sides of a right triangle are 6 and 8 units long, respectively. What is the length of the perimeter?

4. What is the area of an isosceles triangle inscribed in a circle of radius r if the base of the triangle is the diameter of the circle?

5. If the area of a right triangle is 20 ft2, which of the following represent the possible measurements for the base and height of the triangle?

1. C: Answer C as this phrase tells the reader where the man appeared. Answer A creates a run-on sentence, answer B is redundant, and choice D creates a disagreement of verb tense.

2. B: The original and answer C are slang usage, and D, suggesting that the villagers had only then noticed the monkeys, is inappropriate.

3. B: As the clause following the conjunction and is dependent, the comma is not employed.

4. D: The action described in the portion of the sentence following the conjunction is contrary to expectation, since the villagers hunted less despite the generous payments, and but reflects that contradiction better than any of the other choices.

5. D: The correct spelling for the possessive pronoun.

6. C: Answer C implies that the action that follows is a consequence of the one that precedes, i.e., the man raised his price because the villagers were losing interest.

7. A: No comma is used to set off a dependent clause.

7. C: The first paragraph states that the main purpose of DST it to make better use of daylight.

8. A: Energy conservation is discussed as a possible benefit of DST, not a negative effect of it.

9. D: The first paragraph states that DST involves setting clocks forward one hour in the spring and one hour backward in the fall.

10. B: The last sentence in paragraph four notes that agricultural and evening entertainment interests have historically been opposed to DST.

11. D: The passage gives examples of both good and bad effects extra daylight can have on health.

1. A: From the starting expression, compute:

4. B: The easiest pair to test is the third: y = 4 and x = 0. Substitute these values in each of the given equations and evaluate. Choice B gives 4 = 0 + 4, which is a true statement. None of the other answer choices is correct this number set.

4. C: The line in the graph has a negative slope and a positive y-axis intercept, so the factor multiplying the variable x, or the slope, must be negative, and the constant, or y-intercept, must be positive.

2. D: The sides of a triangle must all be greater than zero. The sum of the lengths of the two shorter sides must be greater than the length of the third side. Since we are looking for the minimum value of the perimeter, assume the longer of the two given sides, which is 6, is the longest side of the triangle. Then the third side must be greater than 6 – 4 = 2. Since we are told the sides are all integral numbers, the last side must be 3 units in length. Thus, the minimum length for the perimeter is 4+6+3 = 13 units.

4. A: The area of a triangle equals half the product of base times height. Since the base passes through the center, we have base = 2 r and height = r, so that the area A is

5. C: The formula for the area of a triangle is 1/2bh, or one-half the base times the height. This means that the product of the two sides will actually be twice the number that is provided as the area, i.e., 20 x 2 or 40. Although the actual base and height aren’t provided, only one answer choice offers two numbers that equal a product of 40 – 8 and 5.