Questions 1 – 7 pertain to the following passage: 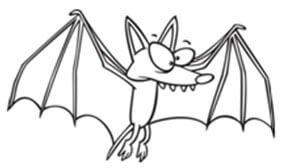 Most people are afraid of bats. They are scared of their sharp teeth. They are scared because bats only come out at night. People worry that bats will bite them, but bats do not feed on people. Most bats in North America eat insects that they catch in the air with their teeth. Some bats eat mice, birds, frogs, lizards, and other bats. One kind of bat in Mexico catches fish in the claws of its hind legs. In Asia, large bats called Flying Foxes eat fruit. Other bats with long noses drink sweet juice from flowers.

All bats are mammals. They are the only mammals that fly. Bats live everywhere in the world except Antarctica and the North Pole. Most bats do not drink blood. Only vampire bats drink blood. Vampire bats live in Central and South America. They land on animals and bite them to make a tiny cut. Then they lap up the blood with their tongues. Vampire bats rarely bite people. If they do bite, they do not take much blood. However, bats may carry germs that cause disease.

Bats are not good pets, but they are useful to people. They eat insects, mice and other pests. Some cultures even think bats bring good luck!

1. Which of the following choices names the foods that bats eat?

3. Which of the following are ways that bats are helpful to people? Select all that apply.

5. Look at the diagram below about flying foxes and vampire bats, and then answer the question that follows.

Which of the following belongs in the blank?

6. What is the title of this article?

7. Which of the following is a trait that most bats in North America have?

1. B: The story lists the things different kinds of bats eat, including mice, blood, fish and insects.

2. B: Bats live everywhere where there are plants. For that reason, the only places you will not find bats are Antarctica and the North Pole, since those areas are too cold for plants.

4. D: In the story it is stated that, “They are the only mammals that fly.”

5. D: The space in the middle of a Venn diagram lists the components that the two sides of the diagram have in common. Both kinds of bats only come out at night.

7. C: In the first paragraph it states that “Most bats in North America eat insects that they catch in the air with their teeth.” The story does not say anything about bats that come out in daytime, and the other traits belong to different species of bats.