Questions 1 – 8 pertain to the following passage: 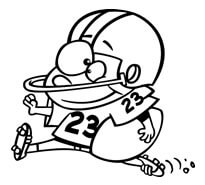 1 The alarm sounded and Josh Bradley awoke with a start. This was it, the day he’d been waiting for all year. His heart began to beat more quickly just thinking of the game. The anticipation was making his stomach do flips.

2 Josh’s dad appeared in the doorway.

4 Josh grinned from ear to ear. “Great, Dad! Ready to win the game!”

6 Today was the conference championship game between Josh’s school, Madison Middle School, and its archrival, Hampshire Middle School. Both teams had had great seasons, with Madison’s record being 7-1, and Hampshire’s 6-2. Josh in no way underestimated their opponent today. No, he knew this game would be a strenuous battle.

7 After what seemed like a never-ending school day, the last bell rang and Josh headed for the locker room. After suiting up, the team gathered around to listen to Coach Adams’ final pep talk.

8 “Well, boys, this is it, the championship game,” began Coach Adams. “We’ve had a great season, you’re a tremendous bunch of athletes, and a championship win would just be the cherry on top of such a dream season. Let’s go out there and play our best, and that trophy will be ours!”

9 The team headed out to the field. Both teams were fired up, fighting for the right to be known as the conference champions. The game was tight all the way through the first quarter, with each team scoring a touchdown, making the score at the beginning of the second quarter 7-7.

10 It was 3rd down and 6, when Josh dropped back, looking for a receiver. Suddenly, one of the Hawks’ tackles burst through the line from the right, headed right for Josh. Josh never saw him coming and, before he knew it, he was on the ground, moaning in pain. When he opened his eyes, he saw stars. He looked toward the sideline, and it looked like everyone was standing on their heads!

11 Josh closed his eyes and tried shaking his head, but the severe pain that ensued took his breath away. He grabbed his head with both hands and lay flat on his back. Within seconds, Coach Adams, the trainer, and the other coaches were circled around him, asking him how he was feeling. After a brief discussion, they assisted Josh in getting to his feet, and they helped him walk to the locker room where the trainer did a quick assessment.

12 “Josh, I think you have a concussion,” said Dr. Huff. “Concussions can be very dangerous; I don’t think you should go back in.”

13 His mom and dad had rushed from the stands to the locker room, and Josh looked to them for support. “Mom, Dad, I have to go back in! This is the biggest game of the year!”

14 There was a pause as his parents exchanged glances; then his father spoke. “I’m afraid Dr. Huff’s right,” said Mr. Bradley. “Josh, your health is the most important thing. There will be other games.”

15 Other games? Josh’s eyes filled with tears. He lay back on the stretcher and covered his face with his hands. He had let his team down in the most critical game of the year.

16 His parents drove Josh to the hospital. An x-ray showed that Josh had indeed suffered a concussion. Although his head hurt, the pain of missing the game was much worse. As he was lying on the bed, trying desperately to fight back the tears, he heard a commotion in the hallway. It got louder and louder, but then everything abruptly went quiet. Josh was wondering what was going on out there when suddenly the door flew open and there was Coach Adams and the entire team. The players were laughing and cheering, whooping and hollering, as they piled into his room and gathered ’round his bed.

18 After the cheers subsided, Coach Adams spoke. “Josh, you did the right thing by taking care of yourself. There will be other big games and you’re still a champion,” said Coach Adams.

1. Divide the word anticipation from paragraph 1 into syllables.

2. Which word would be a good substitute for anticipation in paragraph 1?

3. Who is telling this story?

4. Which word would be a good substitute for conference in paragraph 6?

5. What is the main theme of this story?

6. Divide the word underestimated from paragraph 6 into syllables.

8. In paragraph 14, what does it mean when it says that Josh’s parents exchanged glances?

8. it means they looked at each other at the same time