1. The table below shows changes in the area of several trapezoids as the lengths of the bases, b1 and b2, remain the same and the height, h, changes.

Which formula best represents the relationship between A, the areas of these trapezoids, and h, their heights?

2. This table shows lengths, widths, and areas of four rectangles. In each rectangle, the length remains 40 meters, but the width changes.

Which formula best represents the relationship between P, the perimeters of these rectangles, and w, their widths?

3. The drawing shows a protractor and a trapezoid.

Which is closest to the measure of ?JNM?

5. Stephen researched the topic of solar-powered lights for his science project. He exposed 10 new solar lights to five hours of sunlight. He recorded the number of minutes each light continued to shine after dark in the list below.

Which of these numbers is the mean of the number of minutes in Stephen’s list?

1. B: The formula for the area of trapezoids is not necessarily needed here to do this problem. Since the relationship between the area, A, and the height, h, can be seen in the chart, looking at the third and fourth columns to see if there is a pattern will show a relationship between the variables. Each value in the area column is equal to 6 times the value in the height column. So, we get A=6h. 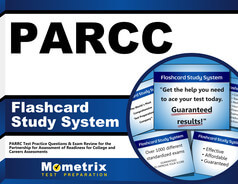 2. B: To answer this question, start with the perimeter formula, P=2(l+w) and substitute values that are known to remain the same. So, P=2(l+w) becomes P=2(40+w). Then we distribute, multiplying both numbers inside the parenthesis by 2 and get P=80+2w. Writing the variable first in the expression gives us: P=2w+80.

3. A: Since segment NM lies along the right side of the protractor, we read the inside scale. The segment NM passes between 60° and 70°, much closer to the 60°, so the correct answer is 61°.

5. D: The mean is just the average. To calculate this, find the total of all 10 numbers by adding. Then, divide that total by 10 because that is the number of data points. The total is 750, so the mean of this group of numbers is 75