The Health Occupations Basic Entrance Test (HOBET) is an atypical standardized test, in that it attempts to integrate a measure of social skills into the basic and fundamental academic categories of math, science, reading, language arts, and so forth. It is not a psychological test, but it does have psychological elements that are important to the career of a health professional. 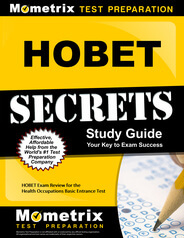 Prepare with our HOBET Study Guide and Practice Questions. Print or eBook. Guaranteed to raise your score. Get started today!

The health care environment is notorious for placing a great amount of stress on individuals who must deal with patient health concerns and anxieties, as well as the practical problems of medical treatment. The HOBET identifies whether a candidate can interact socially in a positive manner and deal with considerable stress. The exam also determines the test taker’s favored learning style.

HOBET is administered at a variety of test sites, most often at the location of a health occupation college or school. The test is administered by computer. The test taker is expected to have a functioning knowledge of algebra, fractions, percentages, statistics and other math functions.

At many schools, the test can only be taken twice. Other schools allow multiple retesting after a two-month interval of time passes from the date of the first test. Registration fees for the HOBET may vary slightly from one school to another. Generally speaking, the reading comprehension and scientific math questions are at a tenth-grade level. Keep in mind that academic levels and scores vary in different parts of the country and in different school districts.

The HOBET is one of several criteria that determine fitness and aptitude for a variety of health care occupations. Colleges offering curricula in the health care fields have a major investment in the success of their students. Since the HOBET is geared specifically toward selecting candidates with the greatest chances for success, test-taking ability is another area measured by the test. It may seem odd for a standardized test to measure a student’s abilities on other standardized tests, but it is so.

The test-taking abilities of a student are profiled within three categories: Frustration Level, Instructor Level, and Independent Level. It is important for the prospective health care professional to achieve a score at least at the Instructor Level. The Frustration Level indicates an inadequate level of preparation and sophistication to take on the challenge of the many standardized tests that are part of the future college curriculum.